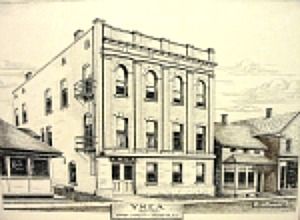 * In June1878, the local Association affiliated with the New York State YMCA

* In 1895 the late George I. Wilber donated $4,000 to the Y and later that year donated the lot where the Broad Street building was to stand

* After a successful capital campaign and construction of the Broad Street YMCA was complete, the building was dedicated on March 27, 1900

* The Oneonta YMCA has always been deeply rooted in the community. In 1907 the original meetings to discuss the village becoming a city were held at the YMCA Broad Street YMCA.

* April 1930 the Oneonta Y installed the first indoor swimming pool in the area to the tune of roughly $50,000

* As the popularity of the Y grew and the demand for service increased it became necessary to look to a larger facility to accomodate the needs of the community. In 1963 the Y, under the direction of W. Clyde Wright, started making plans and initiated a capital campaign of more than $700,000 for the present Ford Avenue building